We’re now ready to start learning the Python language itself.

In this lecture, we will write and then pick apart small Python programs.

The objective is to introduce you to basic Python syntax and data structures.

Deeper concepts will be covered in later lectures.

You should have read the lecture on getting started with Python before beginning this one.

Suppose we want to simulate and plot the white noise process \(\epsilon_0, \epsilon_1, \ldots, \epsilon_T\), where each draw \(\epsilon_t\) is independent standard normal.

In other words, we want to generate figures that look something like this: 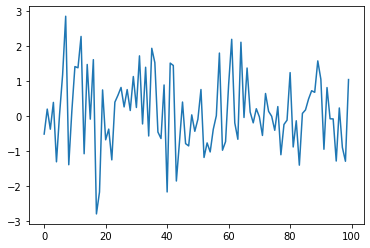 We’ll do this in several different ways, each time learning something more about Python.

We run the following command first, which helps ensure that plots appear in the notebook if you run it on your own machine.

Let’s break this program down and see how it works.

The first two lines of the program import functionality from external code libraries.

The first line imports NumPy, a favorite Python package for tasks like

After import numpy as np we have access to these attributes via the syntax np.attribute.

We could also use the following syntax:

But the former method (using the short name np) is convenient and more standard.

The reason is that the core language is deliberately kept small, so that it’s easy to learn and maintain.

When you want to do something interesting with Python, you almost always need to import additional functionality.

As stated above, NumPy is a Python package.

Packages are used by developers to organize code they wish to share.

In fact, a package is just a directory containing

You can check the location of your __init__.py for NumPy in python by running the code:

Here np refers to the package NumPy, while random is a subpackage of NumPy.

Subpackages are just packages that are subdirectories of another package.

For instance, you can find folder random under the directory of NumPy.

Recall this code that we saw above

This is also fine.

The advantage is less typing if we use sqrt often in our code.

The disadvantage is that, in a long program, these two lines might be separated by many other lines.

Then it’s harder for readers to know where sqrt came from, should they wish to.

Returning to our program that plots white noise, the remaining three lines after the import statements are

The first line generates 100 (quasi) independent standard normals and stores them in ϵ_values.

The next two lines genererate the plot.

We can and will look at various ways to configure and improve this plot below.

Let’s try writing some alternative versions of our first program, which plotted IID draws from the standard normal distribution.

The programs below are less efficient than the original one, and hence somewhat artificial.

But they do help us illustrate some important Python syntax and semantics in a familiar setting.

Here’s a version that illustrates for loops and Python lists.

Let’s study some parts of this program in more detail.

Consider the statement ϵ_values = [], which creates an empty list.

Lists are a native Python data structure used to group a collection of objects.

Items in lists are ordered, and duplicates are allowed in lists.

The first element of x is an integer, the next is a string, and the third is a Boolean value.

When adding a value to a list, we can use the syntax list_name.append(some_value)

Here append() is what’s called a method, which is a function “attached to” an object—in this case, the list x.

We’ll learn all about methods later on, but just to give you some idea,

Lists in Python are zero-based (as in C, Java or Go), so the first element is referenced by x[0]

Now let’s consider the for loop from the program above, which was

These two lines are called a code block, since they comprise the “block” of code that we are looping over.

Unlike most other languages, Python knows the extent of the code block only from indentation.

In our program, indentation decreases after line ϵ_values.append(e), telling Python that this line marks the lower limit of the code block.

More on indentation below—for now, let’s look at another example of a for loop

This example helps to clarify how the for loop works: When we execute a loop of the form

The Python interpreter performs the following:

The sequence object can in fact be a very general object, as we’ll see soon enough.

In discussing the for loop, we explained that the code blocks being looped over are delimited by indentation.

In fact, in Python, all code blocks (i.e., those occurring inside loops, if clauses, function definitions, etc.) are delimited by indentation.

Thus, unlike most other languages, whitespace in Python code affects the output of the program.

Once you get used to it, this is a good thing: It

On the other hand, it takes a bit of care to get right, so please remember:

The for loop is the most common technique for iteration in Python.

But, for the purpose of illustration, let’s modify the program above to use a while loop instead.

A while loop will keep executing the code block delimited by indentation until the condition (i < ts_length) is satisfied.

In this case, the program will keep adding values to the list ϵ_values until i equals ts_length:

Let’s do one more application before we turn to exercises.

In this application, we plot the balance of a bank account over time.

There are no withdraws over the time period, the last date of which is denoted by \(T\).

Instead of using a Python list to store this sequence, we will use a NumPy array.

The statement b = np.empty(T+1) allocates storage in memory for T+1 (floating point) numbers.

These numbers are filled in by the for loop.

Allocating memory at the start is more efficient than using a Python list and append, since the latter must repeatedly ask for storage space from the operating system.

Notice that we added a legend to the plot — a feature you will be asked to use in the exercises.

Now we turn to exercises. It is important that you complete them before continuing, since they present new concepts we will need.

The sequence of shocks \(\{\epsilon_t\}\) is assumed to be IID and standard normal.

In your solution, restrict your import statements to

Use a for loop to step through the \(\alpha\) values.

If you can, add a legend, to help distinguish between the three time series.

f'$\\alpha = {α}$' in the solution is an application of f-String, which allows you to use {} to contain an expression.

The contained expression will be evaluated, and the result will be placed into the string.

Similar to the previous exercises, plot the time series

Search online for a function that can be used to compute the absolute value \(|x_t|\).

One important aspect of essentially all programming languages is branching and conditions.

In Python, conditions are usually implemented with if–else syntax.

Now, write a new solution to Exercise 3 that does not use an existing function to compute the absolute value.

Replace this existing function with an if–else condition.

Here’s a shorter way to write the same thing:

Here’s a harder exercise, that takes some thought and planning.

The task is to compute an approximation to \(\pi\) using Monte Carlo.

Use no imports besides

Your hints are as follows:

Consider the circle of diameter 1 embedded in the unit square.

We estimate the area by sampling bivariate uniforms and looking at the fraction that falls into the circle.