In addition to what’s in Anaconda, this lecture will need the following libraries:

Pandas is a package of fast, efficient data analysis tools for Python.

Its popularity has surged in recent years, coincident with the rise of fields such as data science and machine learning. 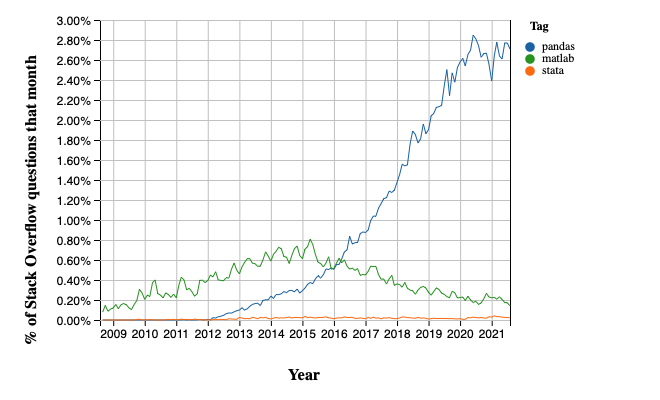 More sophisticated statistical functionality is left to other packages, such as statsmodels and scikit-learn, which are built on top of pandas.

This lecture will provide a basic introduction to pandas.

Throughout the lecture, we will assume that the following imports have taken place

You can think of a Series as a “column” of data, such as a collection of observations on a single variable.

A DataFrame is a two-dimensional object for storing related columns of data.

We begin by creating a series of four random observations

Here you can imagine the indices 0, 1, 2, 3 as indexing four listed companies, and the values being daily returns on their shares.

Not only do they have some additional (statistically oriented) methods

But their indices are more flexible

Viewed in this way, Series are like fast, efficient Python dictionaries (with the restriction that the items in the dictionary all have the same type—in this case, floats).

In fact, you can use much of the same syntax as Python dictionaries

While a Series is a single column of data, a DataFrame is several columns, one for each variable.

In essence, a DataFrame in pandas is analogous to a (highly optimized) Excel spreadsheet.

Thus, it is a powerful tool for representing and analyzing data that are naturally organized into rows and columns, often with descriptive indexes for individual rows and individual columns.

Let’s look at an example that reads data from the CSV file pandas/data/test_pwt.csv, which is taken from the Penn World Tables.

The dataset contains the following indicators

We’ll read this in from a URL using the pandas function read_csv.

In practice, one thing that we do all the time is to find, select and work with a subset of the data of our interests.

To select columns, we can pass a list containing the names of the desired columns represented as strings

To select both rows and columns using integers, the iloc attribute should be used with the format .iloc[rows, columns].

To select rows and columns using a mixture of integers and labels, the loc attribute can be used in a similar way

Instead of indexing rows and columns using integers and names, we can also obtain a sub-dataframe of our interests that satisfies certain (potentially complicated) conditions.

This section demonstrates various ways to do that.

The most straightforward way is with the [] operator.

To understand what is going on here, notice that df.POP >= 20000 returns a series of boolean values.

In this case, df[___] takes a series of boolean values and only returns rows with the True values.

However, there is another way of doing the same thing, which can be slightly faster for large dataframes, with more natural syntax.

We can also allow arithmetic operations between different columns.

For example, we can use the conditioning to select the country with the largest household consumption - gdp share cc.

When we only want to look at certain columns of a selected sub-dataframe, we can use the above conditions with the .loc[__ , __] command.

Real-world datasets can be enormous.

It is sometimes desirable to work with a subset of data to enhance computational efficiency and reduce redundancy.

Let’s imagine that we’re only interested in the population (POP) and total GDP (tcgdp).

We can then save the smaller dataset for further analysis.

It applies a function to each row/column and returns a series.

This function can be some built-in functions like the max function, a lambda function, or a user-defined function.

Here is an example using the max function

This line of code applies the max function to all selected columns.

For the .apply() method

We can use it together with .loc[] to do some more advanced selection.

df.apply() here returns a series of boolean values rows that satisfies the condition specified in the if-else statement.

In addition, it also defines a subset of variables of interest.

When we apply this condition to the dataframe, the result will be

The ability to make changes in dataframes is important to generate a clean dataset for future analysis.

1. We can use df.where() conveniently to “keep” the rows we have selected and replace the rest rows with any other values

2. We can simply use .loc[] to specify the column that we want to modify, and assign values

3. We can use the .apply() method to modify rows/columns as a whole

4. We can use the .applymap() method to modify all individual entries in the dataframe altogether.

Replacing missing values is an important step in data munging.

We can use the .applymap() method again to replace all missing values with 0

For example, single imputation using variable means can be easily done in pandas

There are also more advanced tools in python to impute missing values.

Let’s imagine that we’re only interested in the population (POP) and total GDP (tcgdp).

To do this, we set the index to be the country variable in the dataframe

The population variable is in thousands, let’s revert to single units

Next, we’re going to add a column showing real GDP per capita, multiplying by 1,000,000 as we go because total GDP is in millions

One of the nice things about pandas DataFrame and Series objects is that they have methods for plotting and visualization that work through Matplotlib.

For example, we can easily generate a bar plot of GDP per capita

Plotting as before now yields

An important database for economists is FRED — a vast collection of time series data maintained by the St. Louis Fed.

For example, suppose that we are interested in the unemployment rate.

Via FRED, the entire series for the US civilian unemployment rate can be downloaded directly by entering this URL into your browser (note that this requires an internet connection)

This request returns a CSV file, which will be handled by your default application for this class of files.

Alternatively, we can access the CSV file from within a Python program.

This can be done with a variety of methods.

We start with a relatively low-level method and then return to pandas.

One option is to use requests, a standard Python library for requesting data over the Internet.

To begin, try the following code on your computer

If there’s no error message, then the call has succeeded.

If you do get an error, then there are two likely causes

In the second case, you can either

Assuming that all is working, you can now proceed to use the source object returned by the call requests.get('http://research.stlouisfed.org/fred2/series/UNRATE/downloaddata/UNRATE.csv')

We could now write some additional code to parse this text and store it as an array.

But this is unnecessary — pandas’ read_csv function can handle the task for us.

We use parse_dates=True so that pandas recognizes our dates column, allowing for simple date filtering

Note that pandas offers many other file type alternatives.

Pandas has a wide variety of top-level methods that we can use to read, excel, json, parquet or plug straight into a database server.

The maker of pandas has also authored a library called pandas_datareader that gives programmatic access to many data sources straight from the Jupyter notebook.

While some sources require an access key, many of the most important (e.g., FRED, OECD, EUROSTAT and the World Bank) are free to use.

We will also use yfinance to fetch data from Yahoo finance in the exercises.

For now let’s work through one example of downloading and plotting data — this time from the World Bank.

The World Bank collects and organizes data on a huge range of indicators.

For example, here’s some data on government debt as a ratio to GDP.

The documentation provides more details on how to access various data sources.

Write a program to calculate the percentage price change over 2021 for the following shares:

Here’s the first part of the program

Complete the program to plot the result as a bar graph like this one: 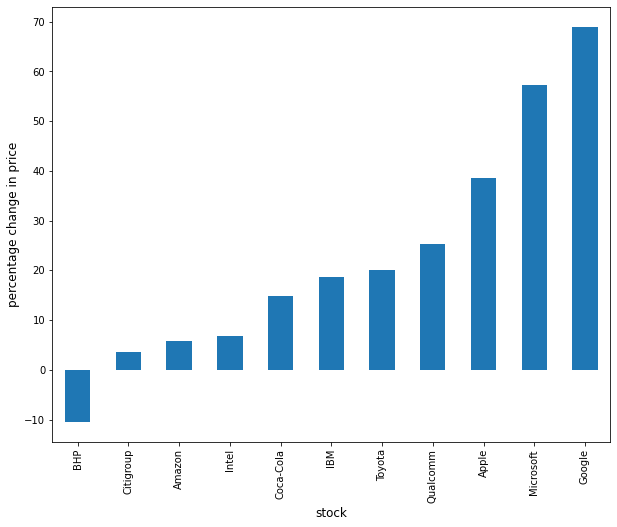 There are a few ways to approach this problem using Pandas to calculate the percentage change.

First, you can extract the data and perform the calculation such as:

Alternatively you can use an inbuilt method pct_change and configure it to perform the correct calculation using periods argument.

Then to plot the chart

Using the method read_data introduced in Exercise 12.1, write a program to obtain year-on-year percentage change for the following indices:

Complete the program to show summary statistics and plot the result as a time series graph like this one: 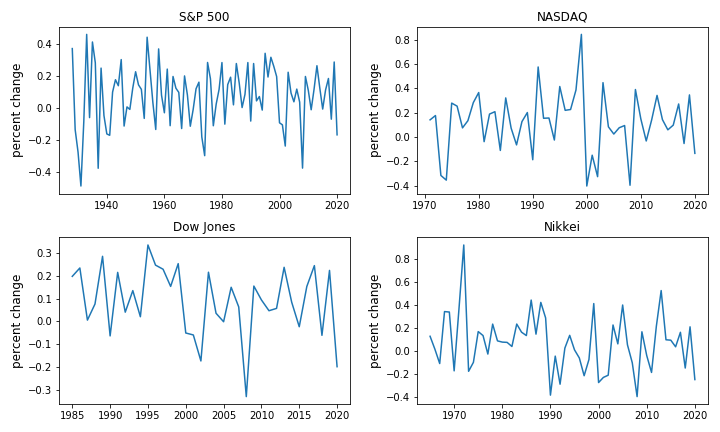 Following the work you did in Exercise 12.1, you can query the data using read_data by updating the start and end dates accordingly.

Then, extract the first and last set of prices per year as DataFrames and calculate the yearly returns such as:

Next, you can obtain summary statistics by using the method describe.

Then, to plot the chart

Wikipedia defines munging as cleaning data from one raw form into a structured, purged one.